MIDI Recorder with E.Piano simply performs record/playback as you input MIDI signals.
日本語のわかる方はこちら。
Contact Information is here.
Could you support me?

When connecting an electric piano, organ, or keyboard to your iPhone/iPad, you can record the performance completely.
As a bonus, the app includes FM E.Piano sounds.
Also there is an on-screen keyboard, you can make a note of your idea anywhere.

– You can toggle kinds of signals to record.
– You can select MIDI channels.
– By default, the app processes signals from all MIDI ports. You can select ports on version 1.2 or the above.
– The app makes files of Standard MIDI File Format 0.
– iTunes File Sharing and iCloud are supported.

MIDI is a standard about controlling audio devices.
You can control musical instruments with separately sold MIDI adapter for iPhone/iPad.

The internal FM synthesizer processes only note on, note off, and sustain control, and ignores the others.

Attention:
This app may sound even if the device is silent.

The internal synth receives signals of the selected receive channel.
The synth will not sound if the channel is different.

Do not hesitate to write a review if you encounter some troubles.

The screenshots are under development. 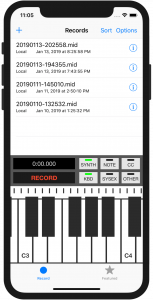 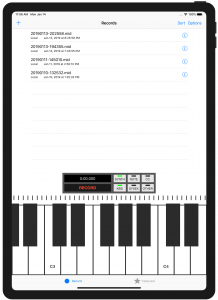 Reduced App size.
Fixed that some SMF was not played correctly.

Fixed that note off signals were sent twice when stopping.

Changed a note off process when stopping.

New playback engine and enhanced player functions. You can now pause, seek, and repeat.
You can now send tips to the developer.
The minimum supported system is iOS 12.4.
Other fixes.

You can choose whether the middle C is C3 or C4.
Added an ad of a new app of mine Not major network ad.

A bug in the time processing of the built-in synthesizer was fixed.