日本語がわかる方はこちら。
Contact Information is here.
Reference manual is here.
Could you support me?

FM synthesizers make sounds with Frequency Modulation.
FM brings rich and brilliant sounds which are impossible to create with analog one.
It makes very complex waves with simple modulations.
The same method is used for a radio.
The synthesizer gained much popularity in the 1980s.

This app lets you make sounds freely with 156 voice parameters.
Almost all parameters but multi-timbres, unisons, filters, and delay are compatible with DX7 mark I.

Audio Unit v3 compatible.
Audiobus compatible.
32 algorithms included.
You can manage the hardware DX7 when it is connected with external MIDI cables.
Supports DX7 System Exclusive Messages (SysEx) and syx files.
Supports Zip files.
You may be able to find a lot of patches on the internet.
A Multi-timbre, Unison function is included. 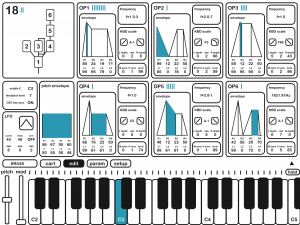 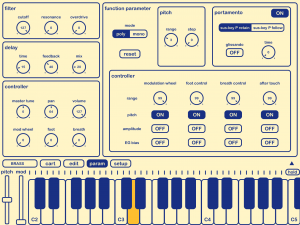 Multiple feedback operators did not sound. (Algorithm 4 and 6)
This bug is fixed on version 2.2.3 or above.

Function Parameters were not saved.
The parameters will be saved in a dxpf file on version 2.0.2 or above.

LFO on amplitude modulation was inverted.
(Saw up should have increased the amplitude but actually decreased.)
This bug is fixed on version 1.0.6 or above.

The app might crash if iCloud is off.
This bug is fixed on version 1.0.2 or above.

The app crashed when file name contains spaces and/or other special characters.
This bug is fixed on version 1.0.1 or above.

Yamaha DX7 is a trademark of Yamaha Corporation.
I have no business relations with Yamaha.