KQ MiniSynth is a polyphonic modular synthesizer.
日本語がわかる方はこちら。
Could you support me?

Disclaimers: Wrong English may be included in this app because I am not so good at English.

Description of all included modules is here.
Contact Information is here.

This app lets you create tones with module patching.
You can add/remove up to 100 modules freely as you want.
(Oscillators, Envelope Generators, Filters, and so on)
Of course it depends on your device’s ability.

Modular system is also good for education use.
You can learn the role of various modules while patching those.

The Patch-Editing view supports zooming.
You can connect modules with taps easily.

Q: The output sounds too quiet.
A: Expression value(Ctrl #11) may be too small. Try to Tap “RESET” on I/O Panel. When it is not improved, try to change an option “Boost Velocities”.

Q: The velocities seem to be ignored on Audio Unit.
A: If you want to enable the note velocity function in Audio Unit, try to turn off “Ignore Velocities” in the settings. (The default is on because GarageBand sends velocities randomly.)

Q. I want to customize the software keyboard.
A. A gear appears when you drag the upper part of the keyboard. Try to tap it with another finger. 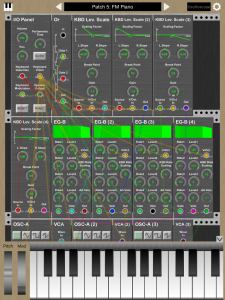 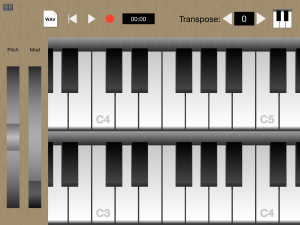 Ableton Link is a new technology that synchronizes beat, phase and tempo of Ableton Live and Link-enabled iOS apps over a wireless network. It lets you play devices together with the freedom of a live band. Anyone can start and stop their part while others keep playing, and anyone can adjust the tempo and the rest will follow.
You can use Link to play with several instances of Ableton Live, with Live and iOS apps, or even without Live in your setup: using Link- enabled apps on multiple devices, or multiple apps on the same device.

The app crashed when launching on iOS 8.x.
Now this bug has been fixed.

FM did not work on OSC-A. In version 2.0.2, master tuning of A4 went strange.
Now these bugs have been fixed.

When connected with Inter-App Audio, the host app icon is invalid.
This bug is fixed on iOS 11.1.

The app might crash with a particular connection.
The VCF did not work well.

You can not open a Save/Load window with version 1.2.1 or below on iOS 7 or below device if the clipboard contains something.

Bug fixes:
– Fixed a layout issue on iOS 12.x.
– Ableton Link now works. It did not work on iOS 14 or later.
– Fixed some descriptions.

Other modules which are not listed may be also changed.